Started typing this post and decided I would "do over" and simply bullet point my week 'cause that is about all my head will allow me to think . . . short bursts vs proper sentences.

Posted by RunningFromCancer at 9:40 AM 2 comments

So we are currently on our annual ski vacation in Colorado. We arrived in Steamboat Springs on Saturday afternoon with the plan to ski there Sun-Wed, then drive down to Frisco, and ski at Beaver Creek, Copper and maybe A-basin, returning to Madison late Saturday. 7 full days of skiing. I was sooooo looking forward to this. Up until this week Colorado, like much of the country has not received normal snow falls this year. In Wi we have really only received 2 measurable snowfalls this season. So although there has been snow - the base of snow at the resorts is no where 'normal', but I was still excited.

We got up early on Sunday morning and headed up the Gondola at Steamboat. It was pretty chilly in the morning and the snow was crusty and icy. On my second run, things were going fine, keeping control, slowing down as necessary for the ice. Then my ski slipped out and I was not able to recover. I took a tumble, it really wasn't very violent, my bindings didn't release. Best I can remember, my knee got twisted inward and pop it went. The kids stopped right by me and asked "are you OK?".
My response, "I don't think so".

My knee didn't hurt, it simply didn't feel right. Ski patrol showed up and checked things out. Verdict was that I would ride the sled down the mountain, and go to the ER for a check.

I have always seen people getting taken off the mountain by ski patrol and thought 'wow I hope I never have to take that way down the mountain'. But on Sunday, that was my path down the mountain. I just kept praying that my patrol person, Ashley, knew what she was doing. I would be lying if I said that it wasn't a slightly scary experience. They strap you into the sled with your head pointed down the hill. It is a really strange feeling to be sliding down the hill head first and not being able to see where you are going.

Anyway, we got down, loaded into a transport vehicle, and headed to the ER. X-rays showed nothing broken or cracked. Dr. poked and twisted my knees and said that I probably either tore or sprained my ACL, but that I needed an MRI and they don't do those at ER. The popping sound is usually a dead giveaway for ACL tears. I have had slight swelling in my knee, but that is pretty much under control. I have been doing my stretching exercises, icing, taking ibuprofen and wearing a full knee brace. I have no pain what so ever.

I have an appointment with an Orthopedic Dr. next Tuesday. I am really hoping that it is a sprain not a tear - but I will have to wait to get the diagnosis.
Although I love to ski, it is something that happens once or twice a year . . . I could live without it . . . BUT I can't live without running. That is my priority!

- Posted using BlogPress from my iPad

Posted by RunningFromCancer at 10:38 AM 1 comments

Our winter has been really mild so far this year.  No snow :-(  to speak of and temperatures in the 30's . . . maybe an evening temp in the low 20's, but those nights have been few and far between.

Well Happy January 1, 2012
Today we got hit with freezing drizzle, falling temperatures and winds at 16 mph with gusts up to 31 mph andI had registered for the New Years Day 5 mile Dash!  I really questioned whether I should run when I woke up this morning and heard the wind howling.  I don't mind running in the cold - but I really don't like to run when it is that windy.
But needless to say - I ran and actually had a great time.
I went back and forth about wearing my Yak Trax and finally decided not to.  Much of the course had a thin glaze of ice and it was slippery - but I just wasn't sure they would do any good on such a thin glaze of ice.  And I didn't want to get over confident on the ice and slip.  Since I didn't wear them - I took it extremely slow over the slippery spots which was much of the first few miles.  Much of the time I was off the side of the pavement, running on the frozen, icey ground - but that had better traction than the pavement.  I was constantly watching the pavement and ground to make sure where my feet were going to hit.  No falls or even near falls!
(falling and getting injured on New Years would NOT be the way to start the Year!!!)
There was some goof ball running as the New Year Baby - gigantic diaper and all!.  When I mentioned this to my son - his comment was, well as long as he was really cruising he was probably OK.  The problem was that he was NOT cruising . . . cause I passed him around mile 3 . . . and I don't cruise! ;-)
I found a local blogger buddie, Kerri before the race - looked for her after - but I didn't really stick around for long. 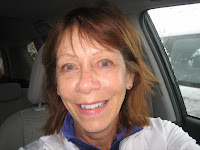 Posted by RunningFromCancer at 11:49 AM 5 comments