Oh the things that we do!

I am wearing invisalign braces to align my upper
right incisor . . . of course the trays will straighten all of my teeth - but
that single tooth is my main concern. 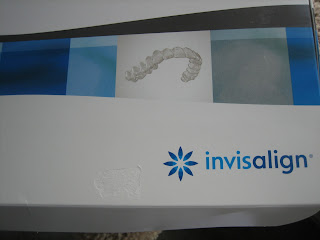 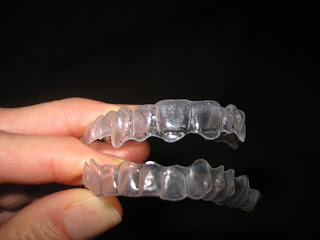 I got my trays on March 7.  I wore the first set of trays for the first month to get use to them.  At times they were bothersome . . . at times they didn't cause any issues.  They were easy to put in and remove and I really didn't think much of them.  I was scheduled for my second ortho appointment on April 4.  At this appointment I got buttons (nubs) attached to 11 of my teeth.  The trays have space built into them for the buttons and will allow the trays to better grip my teeth.  The process of attaching the nubs was harmless, until the Orthodontist had to "grind" off some of the residual material.  Ouchy ouchy!  He got too close to my gum line and boy oh boy did that hurt.

Once the buttons were smoothed off a bit . . . trust me these little things are almost like fangs or daggers in my mouth . . . I then re-inserted my trays.  Holy smokes this was like night and day.  There was a huge difference between wearing the trays without the buttons and with the buttons.  The trays IMMEDIATELY pulled on my teeth and felt very different than they had when I walked into the office.  I was sent on my merry way with my complete set of invisalign trays and 11 buttons attached to my teeth.  I was told to keep the first trays in for another week and then I could move onto tray number 2.  So two days ago I switched to my second set of trays.  It was exciting . . . in a simple way . . . but it did mean that I was on my invisalign journey.  My teeth are still a little sore.  I especially notice it when I pull them out and eat something.  Tonight we had cream of Broccoli soup with a nice loaf of Italian bread . . . I really noticed my sore teeth when I bit into the bread!  I will wear this and each subsequent set of trays for three weeks.

He also suggests that I wear each set of trays for 3 weeks instead of the
standard 2 week period.  This is to acknowledge the difficulty in getting
22 hours of wear per day.  At first glace 22 hours doesn't seem that
impossible.  Simply remove them for a couple of hours to allow for eating,
right!

So here is my average schedule of NOT wearing the trays

So on average the trays are out of my mouth for a little over 4 hours a
day . . . so I am clearly not getting to the recommended time of 22 hours
per day.
Here is both a before picture and a current picture for comparison purposes.


Pro - I brush my teeth more ofter
Pro - I will eventualy have straighter teeth
Pro - I will not see my Orthodontist more than my Oncologoist . . .


Observation - people don't notice that I am wearing trays, because they are not "normally" in your space
Ovservation - Efferdent is the best way to clean the trays.

Heading out for an hour run this morning!  Enjoy the weekend!

Posted by RunningFromCancer at 8:04 AM