Oh my gosh!  I had a great time.  This was the first year of this local race and it was wonderful.  I will definitely sign up again.

My goals were to

Have a fun time!
Take pictures - somehow I am taking my camera with me.  It just fits into my handheld pocket.
Keep a good pace - under 10 min miles
Have fun!
And I accomplished all of them - especially the double fun!

I was up early - to eat and get ready. The race started at 7:45 and I arrived and parked by 7:10. I headed over to use the port-a-pottie . . . . which was NOT easy with this dress on - I was worried about exactly where all of the material might be located at any given moment while using the port-a-pottie. I was very careful to make sure I knew exactly where my sleeves were! When I first arrived at the race I didn't see many people in costume and was actually a little bummed out about it. It was actually quite breezy at the start and I decided to walk back to my car and wait a little while longer before heading to the start. Well I guess the costumes all arrived as I was waiting in my car - YEAH!!!! I headed over to the start at about 7:35. Here are a couple of pictures. 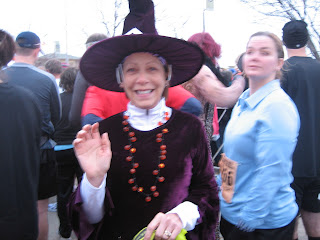 Me at the start! 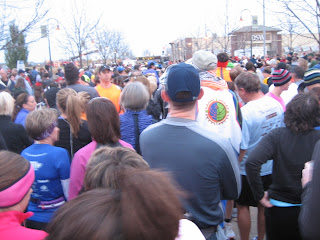 People in front of me! 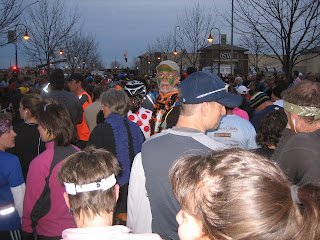 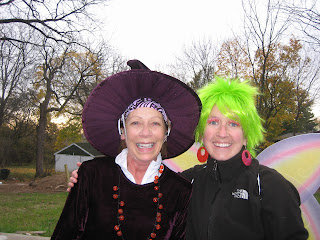 We headed out - 1/2 marathoners and marathoners! Costumes and no costumes! Mile 1 - 3 flew by. That was really the only part of the course that was hilly and other than one relatively steep hill - it was mainly just rolling neighborhood streets. I knew that Kerri - from Running for Life! HERE was working the water station at mile 3 and 23(of the marathon). As soon as I approached I started yelling Kerri - one of the water station people said she was further down the line. I hollered Kerri again and there she was. I stopped and had a photo op with her.
I love her green hair - it would have looked nice under my witches hat!

After mile 3 - we headed into the Pheasant Branch Nature Conservancy - a beautiful area to run. Because it was an out and back - it was a little difficult to pass people - you just had to scout ahead to make sure there were no oncoming runners and then make a dash. There is where I first saw Jamie, from Running Diva Mom, HERE. She saw me first - I think the witch hat gave me away. We cheered for each other and then continued on. She had already turned around in the conservancy and was headed out - while I was just headed into the Conservancy . . . dang she is fast - she got another PR today - AWESOME running Jamie!

As we approached mile 7-8 (I think) I knew I had an opportunity to see Jamie again. Runners were going both directions on the path and I figured I would get my camera ready (out of my pocket on my handheld - which I have to say actually worked pretty good - it was a snug fit - but it fit) - and watch for Jamie.  Sure enough - there she was - running strong.  Here is an action shot of Jamie. 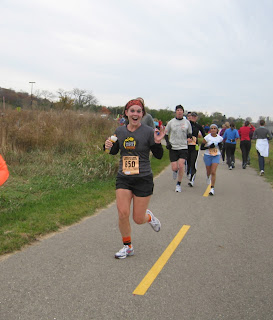 Looking Good Jamie!
Next up was mile 8. A co-worker lives really close and she was going to be at the turnaround on mile 8. I kept my camera out and there she was with two of her three children. 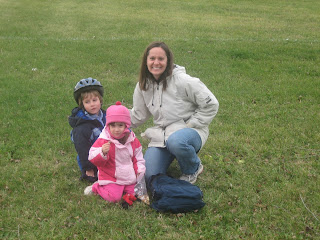 Thanks Angie for showing up - having this to look forward to seemed to make the run go faster!
Now onto the last 5 miles. Nothing special - I felt pretty good - I walked through the water station at mile 9 to make sure that I had a good drink of water - I have Gatorade with me - but had just eaten a GU and wanted water to wash it down. These miles brought us back into town with more cheering and more activity (I love activity to distract me).

As we headed into mile 12 - I got a side-stitch. I just kept telling myself - it wasn't much further and before you know it - there was the finish!

I had a great time.

Here are another couple of photo's from the race 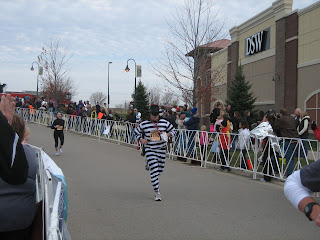 The Hambugular - the guy carried a McDonald's bag - it was pretty funny! 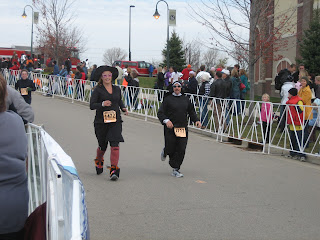 These two were near me for quite a bit of the race - but I finished in front of them ;-)
Posted by RunningFromCancer at 1:38 PM